I dreamt of traveling long before I actually had the courage to do it.  I dreamt of many places, but I dreamt of one place more than anywhere else, Tibet. 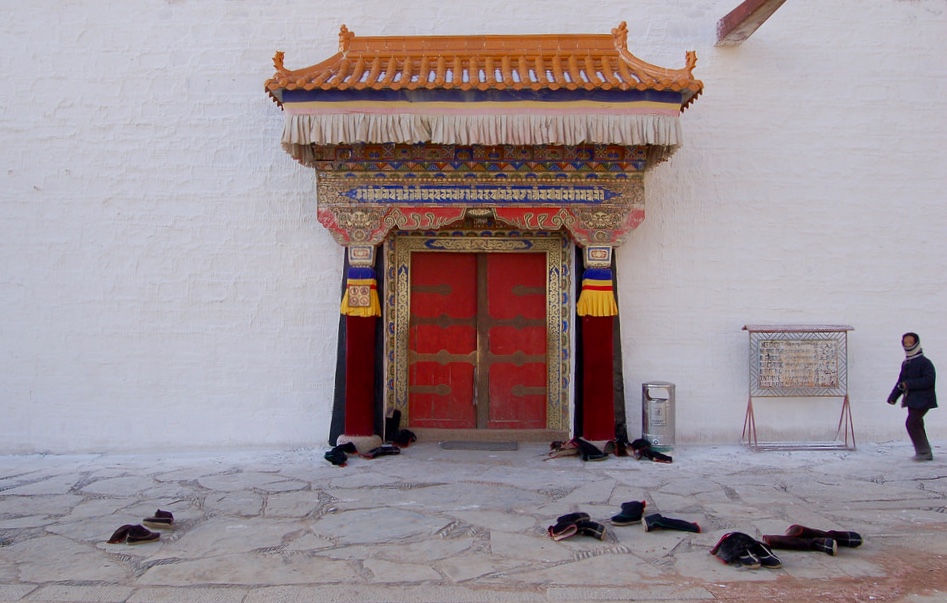 Before leaving for China, I spent 6 months learning basic Mandarin, studying Mahayana Buddhism, and pre-routing my journey through Asia on topography maps (as this was all before I had GPS, or even a simple cellphone).  I didn’t want to just go to Tibet, I wanted to go through Tibet.

It all began in Beijing.  166 kilometers inland from the Yellow Sea lies one of the most polluted cities in the world.  My plane landed and from here I would began an epic 6 month trip from Beijing, China through Tibet and Nepal, meandering my way to the southern tip of India. 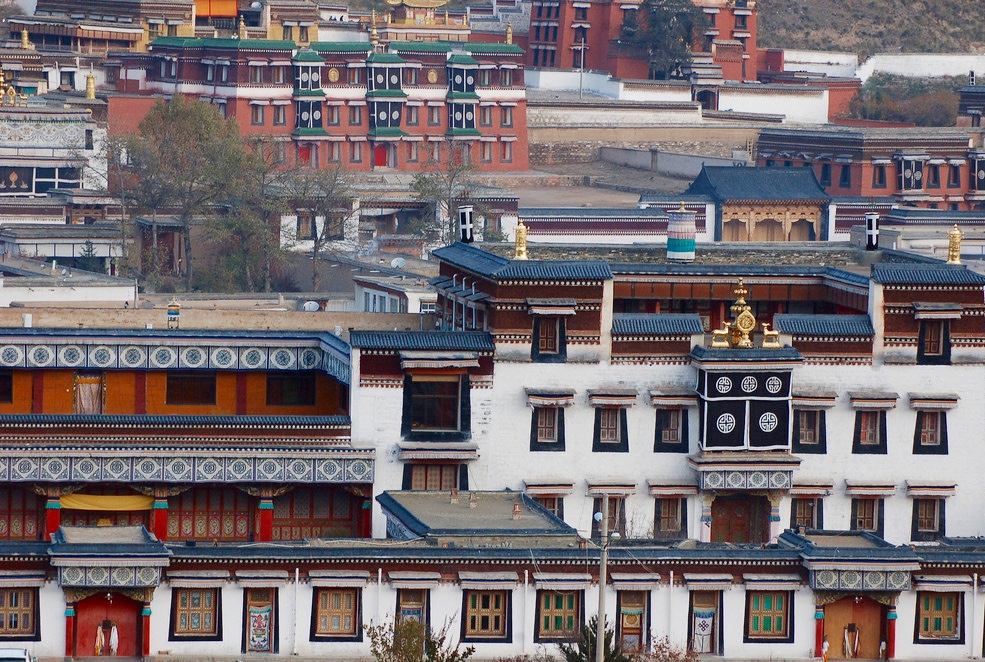 Never once allowing my feet to leave the ground, I travelled more than 8000 km almost completely using public transport.  Sometimes I had travel partners and other times I rode solo. Nearly a week on the train through China, another week in a car through Tibet, a multitude of crowded, slow moving buses through Nepal and finally a long entertaining adventure hopping on and off the Indian rail system to India’s most Southern point.

The train line from Beijing to Lhasa was brand spanking new.  Many were calling it an “engineering miracle” and the “greatest engineering accomplishment of our lifetime.”  It was new, but it was still really long. We broke up the multi-day arduous ascent up the Tibetan Plateau with two stops.  First stop was Xian, home of the Terracotta Warriors. Second stop was in Xining, which has very little to offer most nomadic travelers.  This city is where we would spend nearly 3 days sorting the legalities needed to make this dream a reality.  We needed a plethora of visas, permits, and a mandatory driver and guide to accompany us through this volatile region of the world. 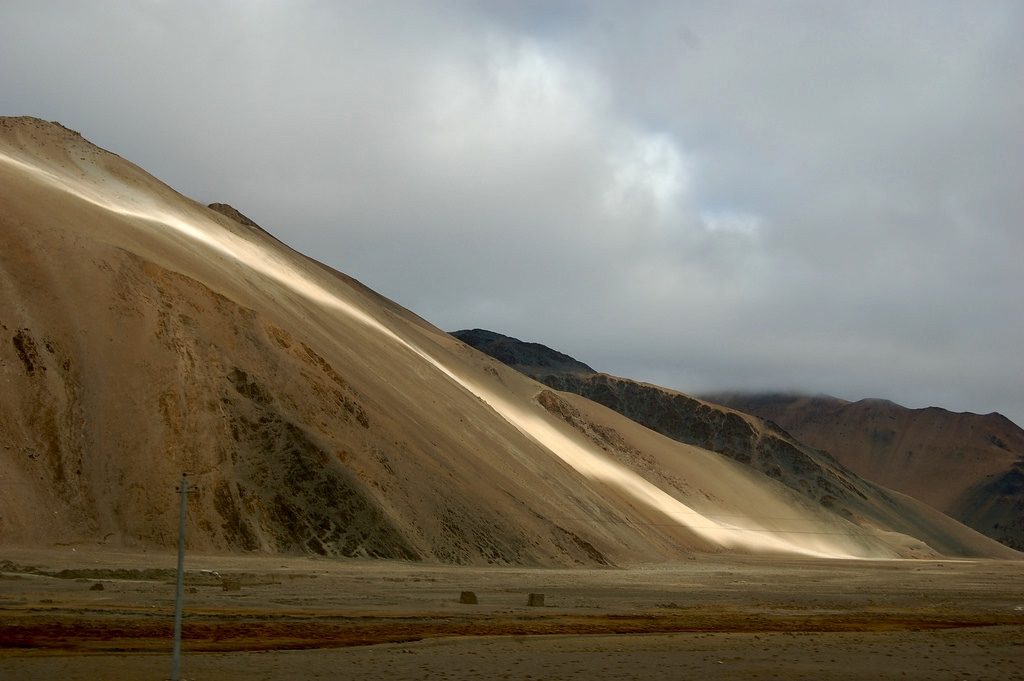 From our train window, we passed snow capped mountains and wide open fields.  The treeless terrain continued to speed past even while we slept.  Hour by hour, the air grew thinner while our destination grew closer.  Passing simple mud and straw homes with painted swastikas on doors and roofs, it felt desolate and spread out. 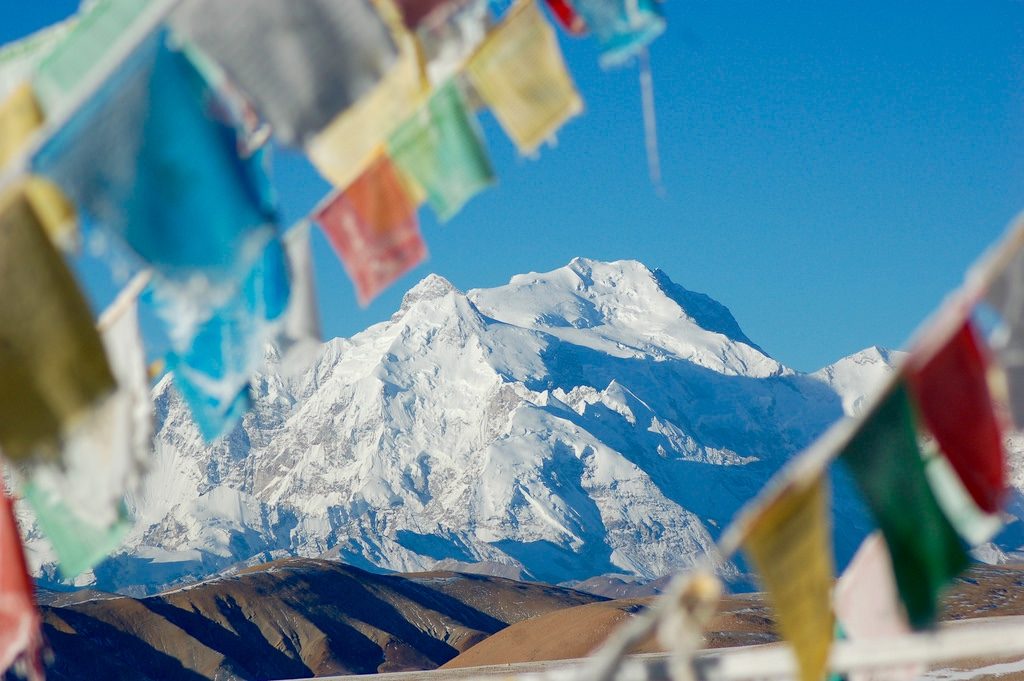 Miles from civilization, there would be a lone pilgrim prostrating on the side of the road.  He was on his religious journey to Lhasa. Dressed in thick animal fur soaked in dust and grime, slowly, very slowly he was making his way.  With another 500 kilometers to go, at least, who knows where he began.

Extending his arms to the sky, then bending down stretching his entire body flat on the ground, and finally stretching his arms out in front of him before he pushes himself back up.  Then he does it all over again. This is the Tibetan Buddhist prostration form of prayer.  Inch by inch, up then down, down then up, he makes his way to Lhasa. 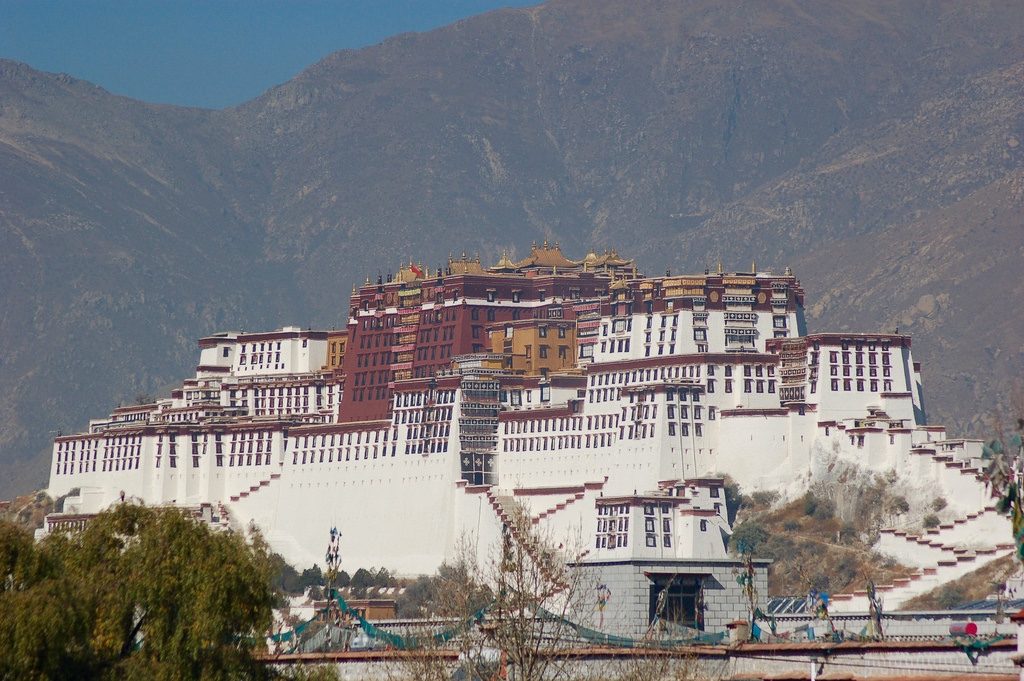 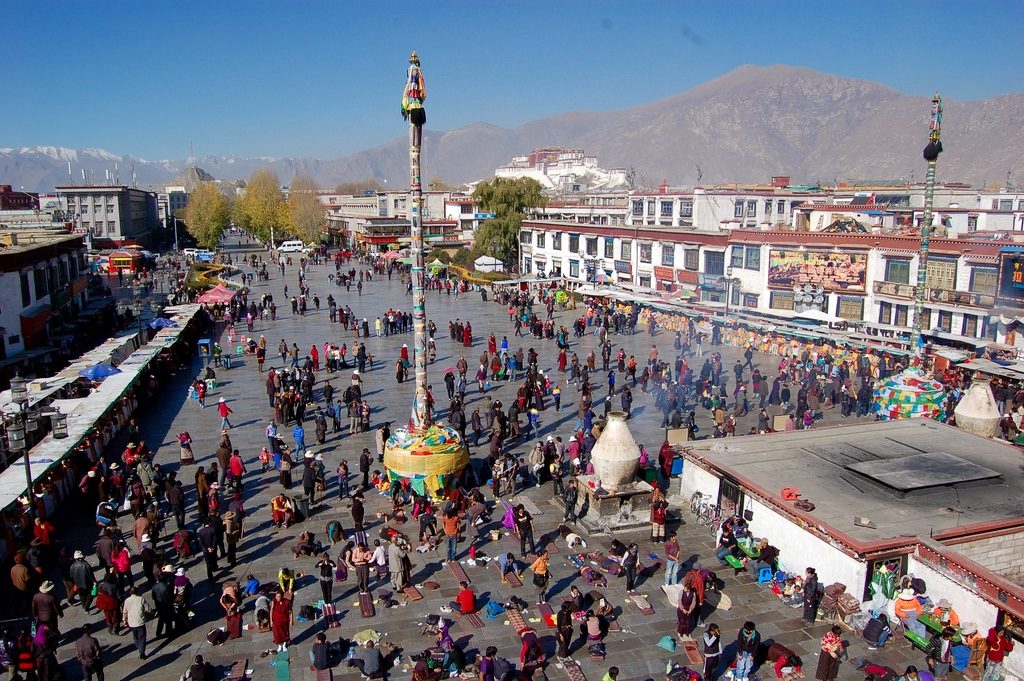 We arrive to Lhasa worn out and tired from the long and grueling journey.  360 degrees mountain views and bustling energy bring an excitement that rejuvenates our fervor.  Once the epicenter of Mahayana Buddhism, we have found ourselves in a living and breathing culture like no place else on Earth.

Despite the political situation, Lhasa still has an air of intense spirituality. The incense and burning yak butter make the temples a bit dark and smoky and it’s smells fill the streets, temples, and homes.  This treasured golden butter can be found everywhere.  They drink it, eat it, bathe in it, and pray with it. 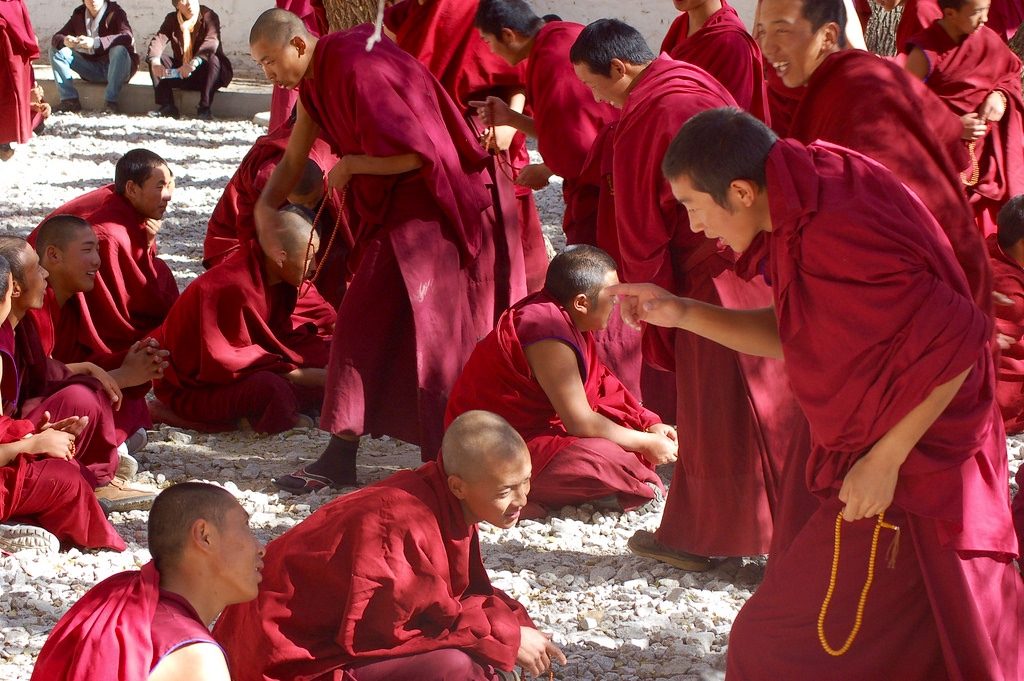 Tibetan prayer wheels line the walls outside and inside every temple. Colorful prayer flags are hung from every flagpole, rooftop and mountainside.  It is believed that with every spin of the prayer wheel and flutter of a prayer flag, prayers are sent out into the air.  A steady stream of pilgrims walk the kora (or “circumambulation”) around the temples day and the night.  Tibetan mantras, like Om Mani Padmi Hum are written, chanted, and sung nonstop.

But of all these things, the most incredible thing of all to see is the full body prostration.  Stretching to the sky, sliding out on the ground, the back up and back down.  Slowly but surely, these incredibly dedicated and determined human beings are working their way not only to Lhasa, but to enlightenment.  Not only for themselves but for the benefit of all of us.  A religion of love, kindness and compassion has a population of sweet, generous devotees. 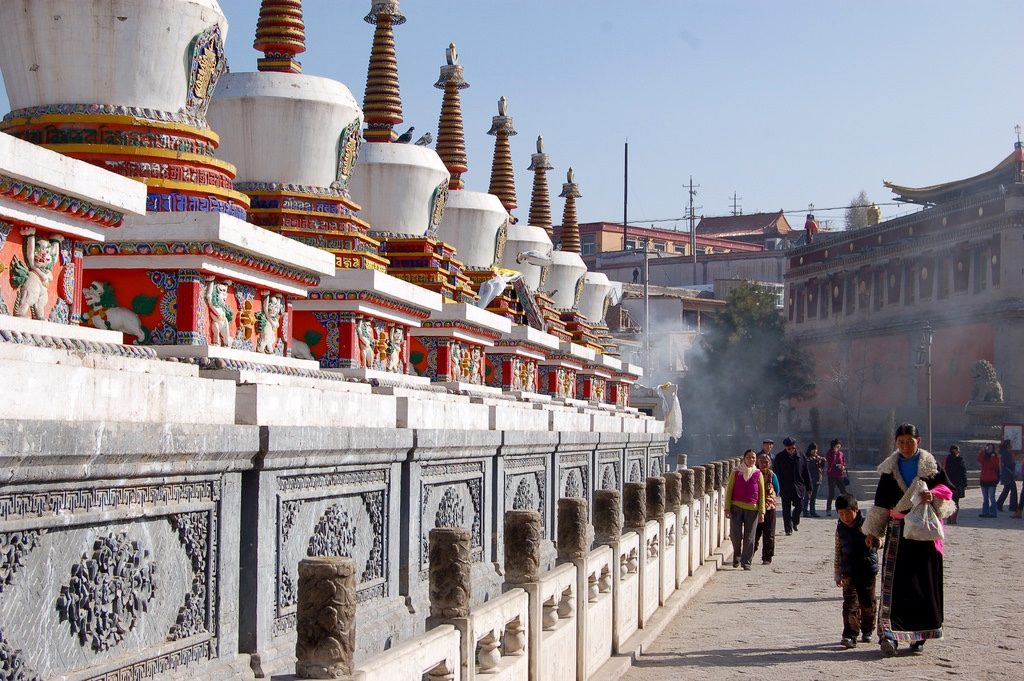 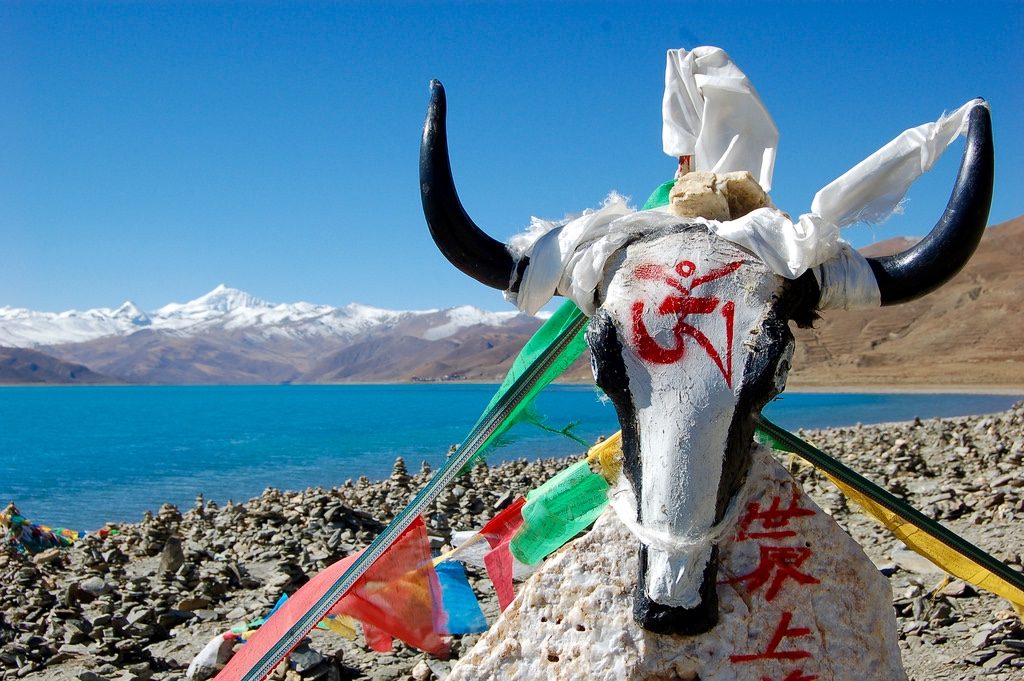 Most know the infamous story.  In the 1950s Mao Tse-dung, the tyrannical Chinese leader invaded Tibet forcing the Dalai Lama to exile into India.  Since then, Many Tibetans have fled into neighboring Nepal.  Those who remain here in the Tibetan Autonomous Region (now a part of China) are victims to one of the most atrocious human rights violations of all times.  They are beaten, imprisoned and bullied to an extent that I truly will never know.  Once we left Lhasa, safely a few hundred kilometers away from any military, camera and machine guns, our guide tells us his stories.  Stories I swore I would never repeat. 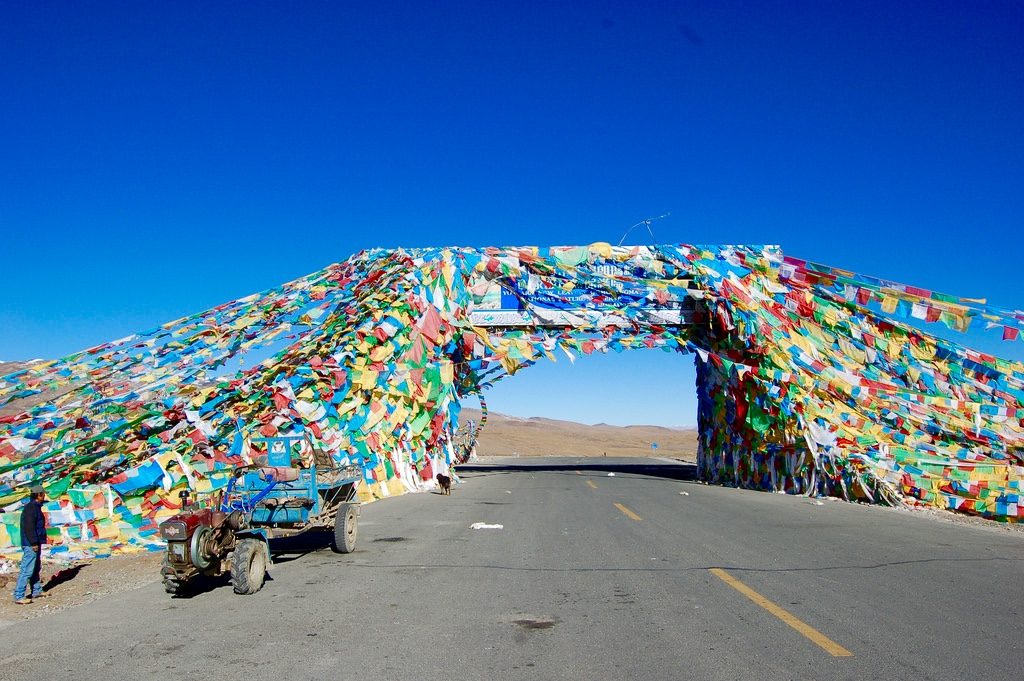 The Potala Palace was once the political center and residential home of the Dalai Lana.  It still stands stoically tall in the center of town, but on the inside it is empty.  Now the palace is merely a tourist attraction, an artifact of what once was.

Today, Lhasa is surrounded by intense Chinese surveillance.  Video cameras are placed on every street corner.  Kalashnikov-wielding soldiers march in unison through the streets.  Gun barrels point down from every rooftop meant to intimidate and scare.  The Chinese Authorities are always watching and waiting.  There is no freedoms here, not even for me as a tourist, a visitor. 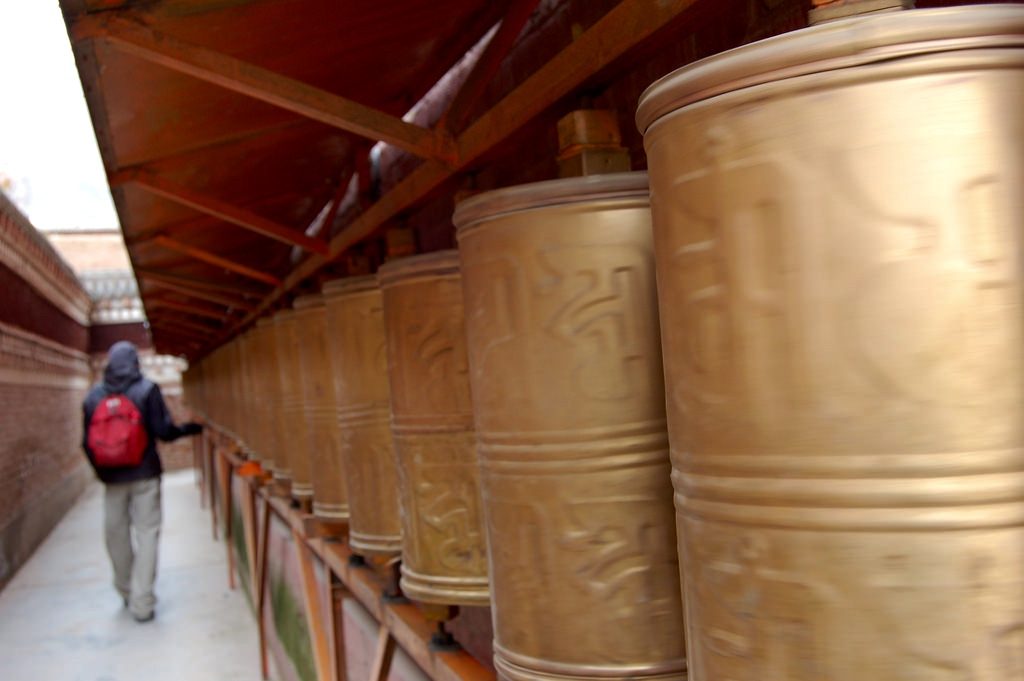 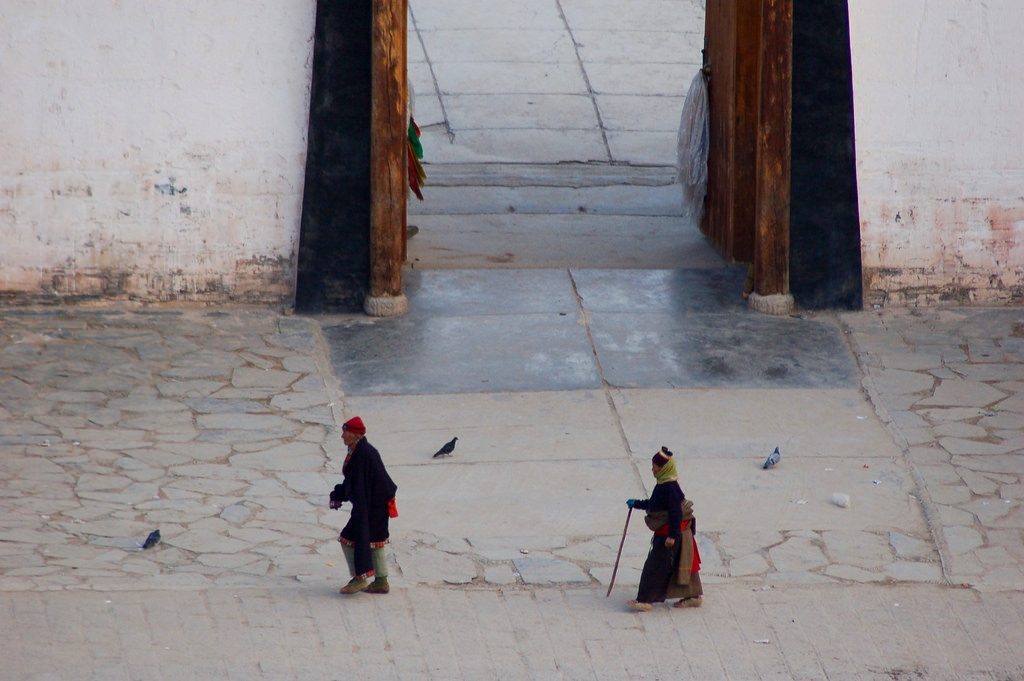 There is a lot of praying as there is a lot to pray for.  What remains of the “Tibetan ghetto” is quickly shrinking into extinction.  The Chinese are moving in and demolishing not only the buildings, but the people as well.  Pictures of the Dalai Lama are not allowed.  Speaking of the Dalai Lama is not allowed. In fact, no Lamas are actively throned at the Jokhang Temple in Lhasa anymore.  Yet the Tibetans still come here to worship it.  Where else would they go?

The Potala Palace is stunning to see both day and night.  No amount of hidden cameras or intimidating weapons can take away the grandeur of this place.  It was made for a king, their political and religious king, The Dalai Lama. 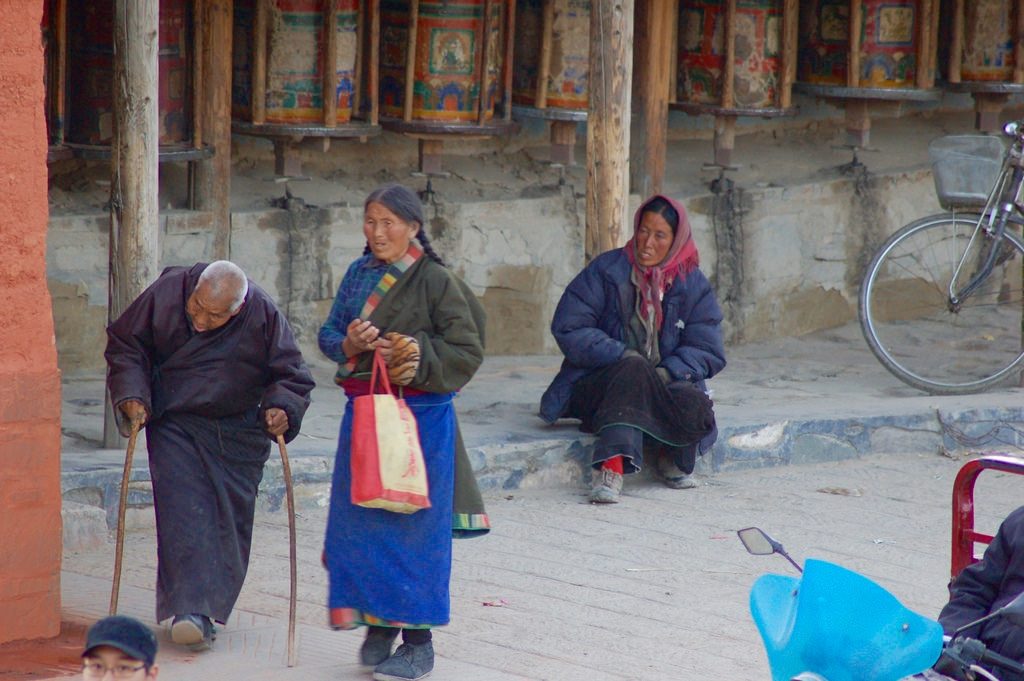 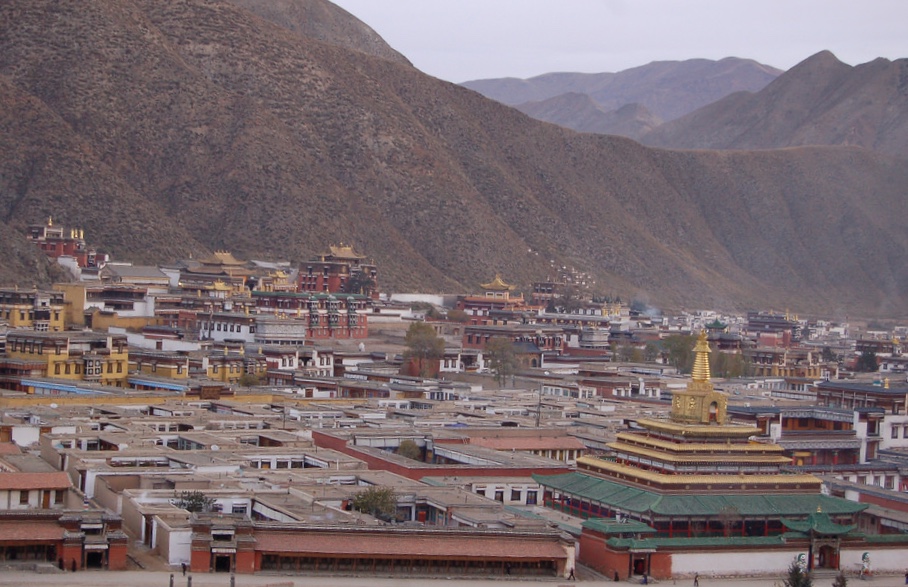 As a traveler, it is not a destination for the faint of heart.  The food is hard to eat day after day.  It is difficult to find anything to eat besides momos (Tibetan dumplings), yak steak, and milk tea.

It didn’t take long before I was bedridden, ill with giardiasis.  It came at no surprise as Tibet (as well as all of China) is far from hygienic. When it comes to toilet, most are dirt holes in the ground.  Toilet paper or even a water bucket to rinse with are nowhere to be found.  On top of this, people are always handling yak dung with their bare hands.  The dried dung is Tibetans primary source of fire for cooking and heat.

Ah!  Did I say heat?  I was so cold the entire trip, I didn’t take a shower or bath for nearly 3 weeks.  And although I might have been dirty and sick for most of the trip, I think I can easily claim that Tibet is my favorite place on the planet.  Perhaps it is because I dreamt about it for all these years.  Or maybe it was the loving, kind and compassionate nature of the Tibetan People.  Or could it be because it is the most amazingly magic place on Earth. 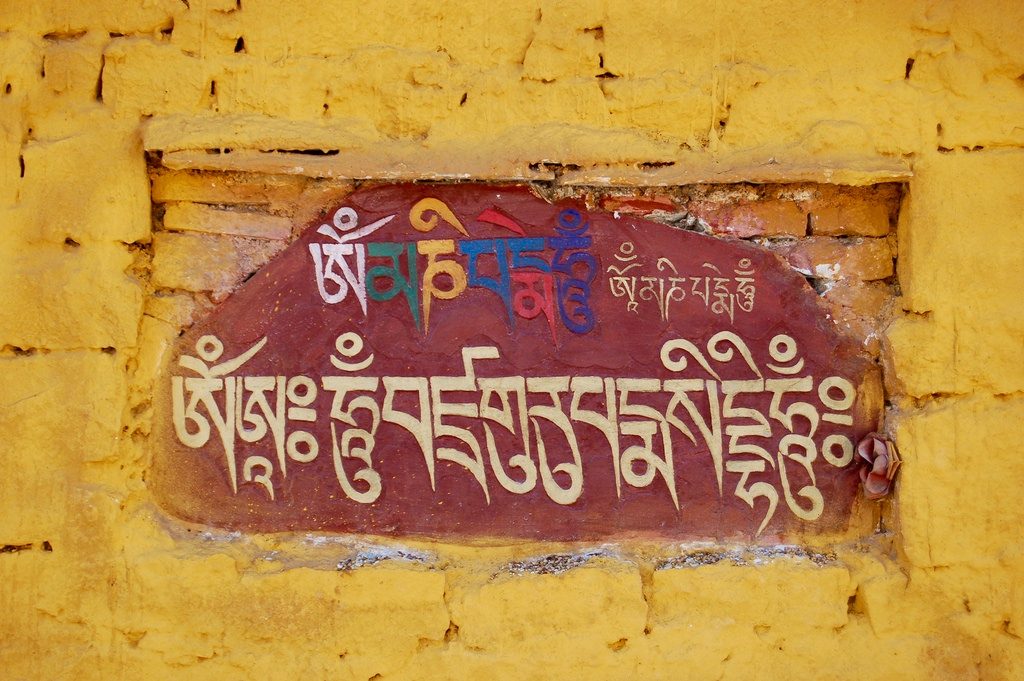 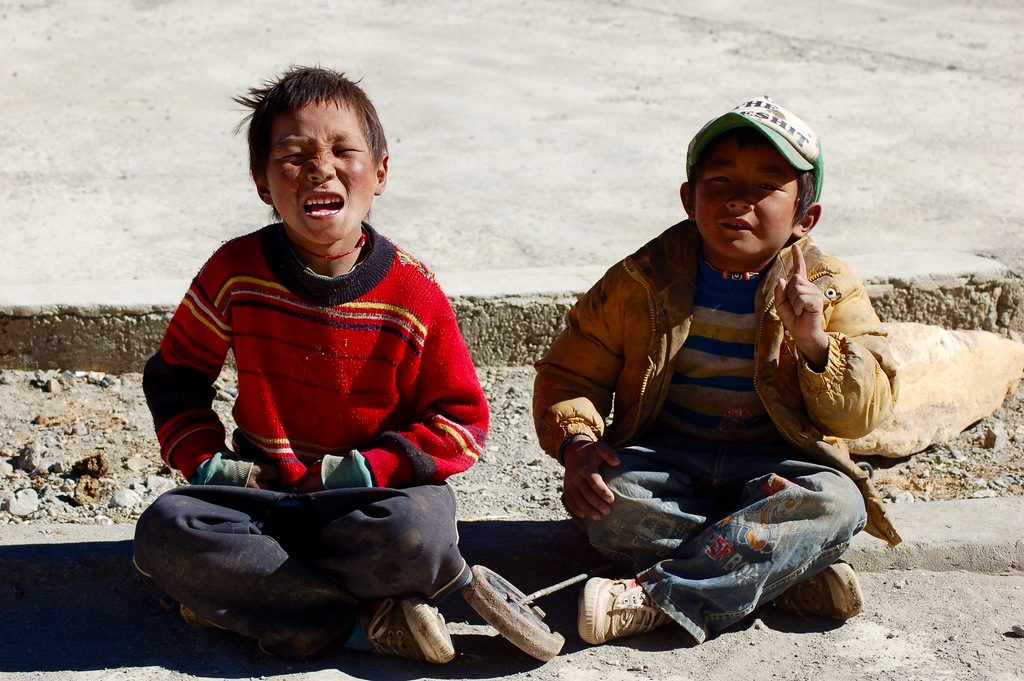 Calm your mind and clear your thoughts so you can explore "your" sacred space.